Five pizzerias in five years in Milan for Berberè: the award-winning brand dedicated to pizza made with sourdough on Thursday 14 October opened a new location in Via Carlo Botta 4, in the Porta Romana district.
The brand continues to invest in the city, where it is already present with four locations in Isola, Navigli, Centrale and Colonne di San Lorenzo, continuing the project that began 11 years ago in Bologna.
With this opening, the brand now has 15 pizzerias in Italy and London, confirming its status as a dynamic and constantly evolving business. A growth driven by a single objective: to give a new identity to pizza, enhancing its craftsmanship through the research of raw materials, the study of doughs, the experimentation of flours, the care in the training of the artisans who work there and the design of the premises.
This commitment is also confirmed by recognitions and awards. After being included in the Top Ten of the best artisan pizzeria chains in the 50Top Pizza 2021 guide, a few days ago the brand obtained, for the fifth consecutive year, the Tre spicchi, the highest award assigned in the prestigious Gambero Rosso’s Pizzerie d’Italia 2022 guide.
The menu is seasonal and is all about pizzas, with around fifteen proposals ranging from the classic to those enriched with cold cuts.
Soft on the inside and crunchy on the outside, Berberè’s pizza stimulates conviviality through a simple idea: eight slices so that all diners can sample the various flavours.
In its preparation, two of the main features are the use of live sourdough and the long leavening time: the maturing process of the dough takes, in fact, 24 hours at a controlled room temperature of 24 degrees. The flours used for the dough are organic semiwhole flours, the result of years of research and experimentation with Alce Nero, and contain fibre, water-soluble vitamins and all the trace elements present in the grain. The pizzas are cooked in an electric oven (also used in the other restaurants) with advanced technological features.
This new outlet is also managed directly: Berberè is not a franchise and does not want to become one. The training and care of the staff, which has now exceeded 180 employees, allows the brand to safeguard the craftsmanship of the product.
As with the other pizzerias, this one in Porta Romana has a site-specific architectural design that plays with the volumes of the spaces and pays homage to Milan, recalling the city’s old tram tracks in its colours and furnishings. As always, the interior features some of the distinctive elements that characterise the format: the boiserie, the wall-painting by the TO/LET visual artists, and the restaurant’s graphics that reproduce the Berberè style. 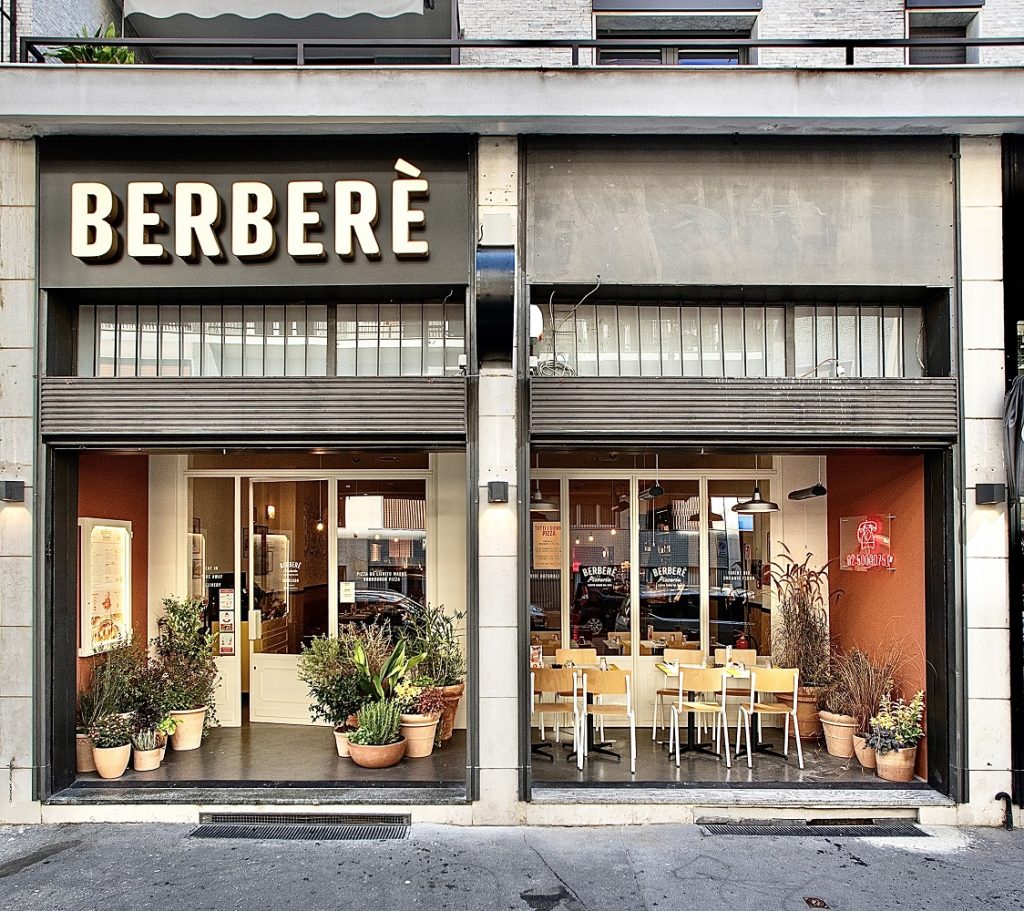 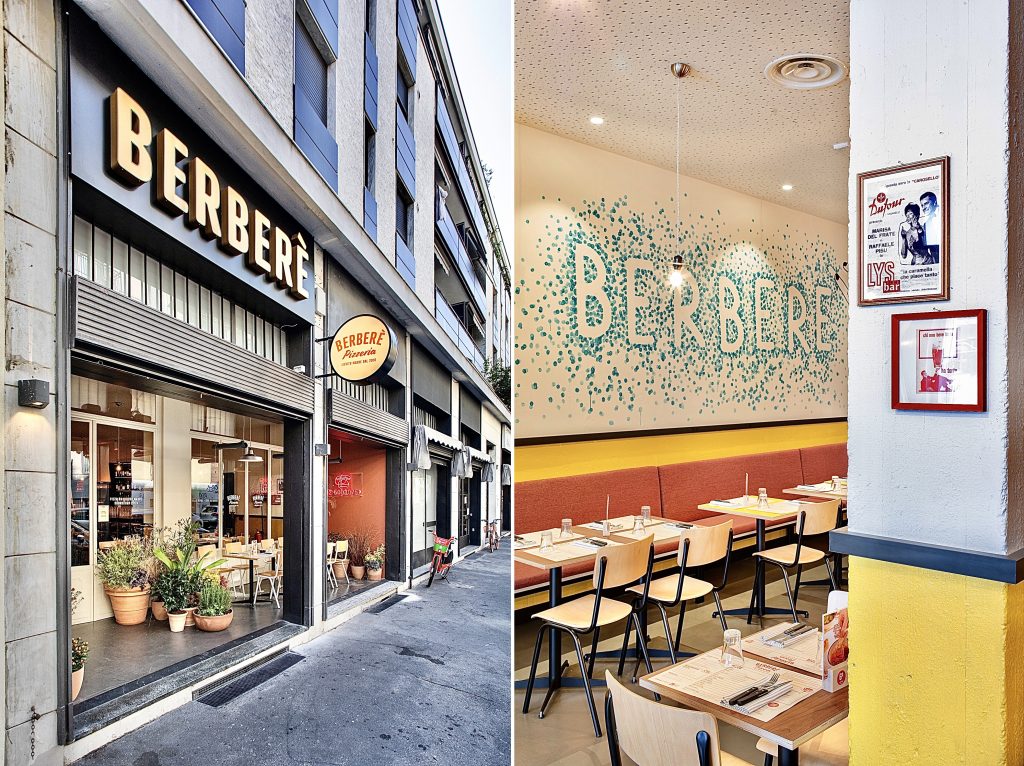 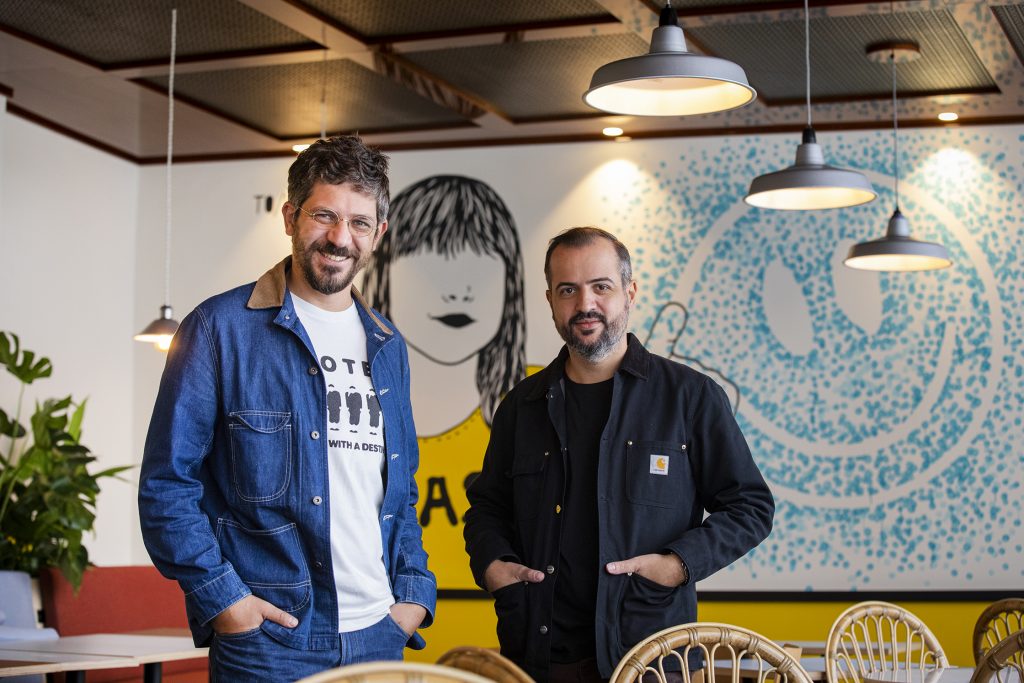 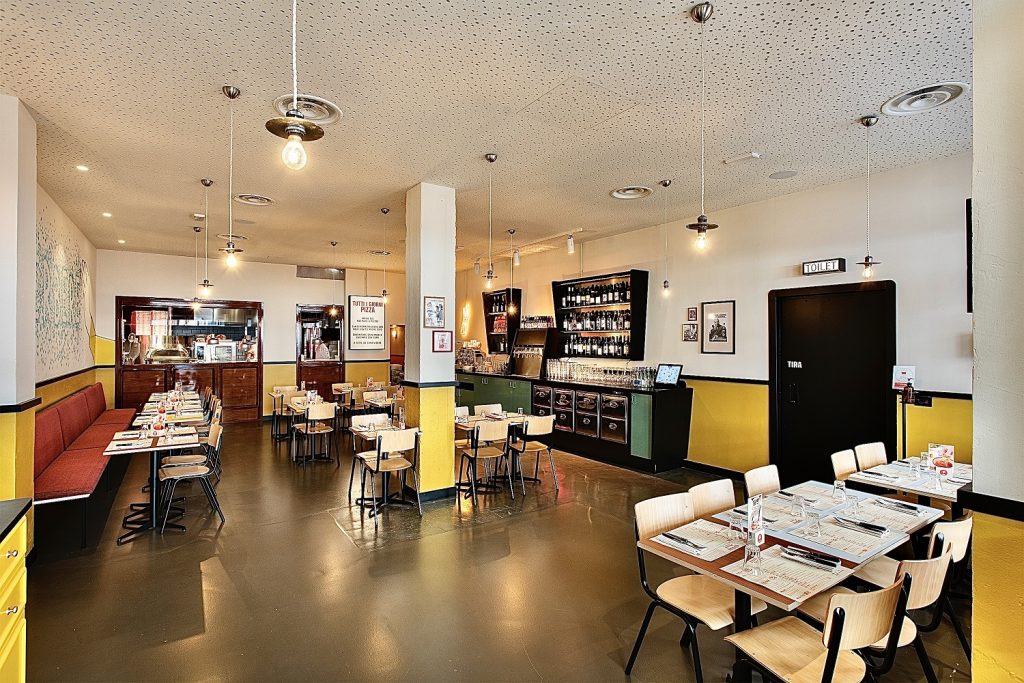 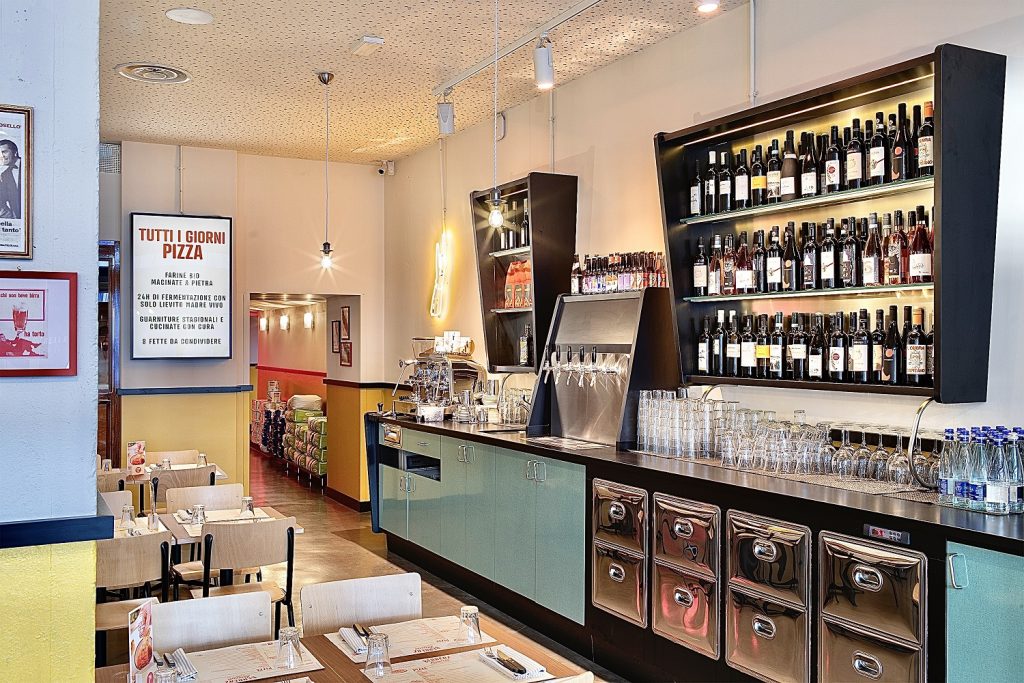 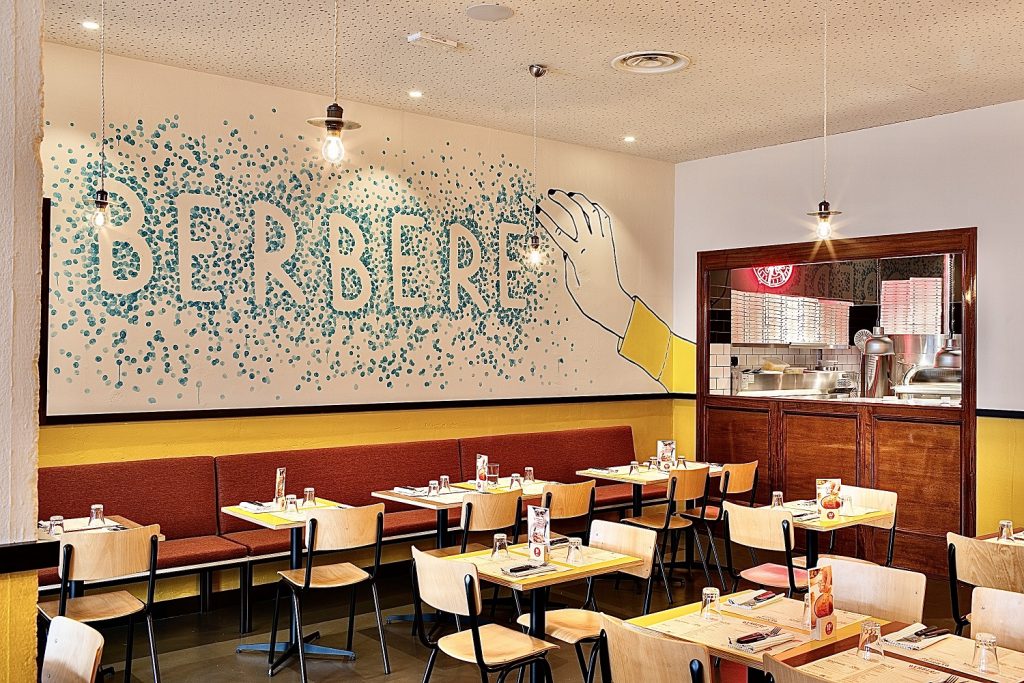 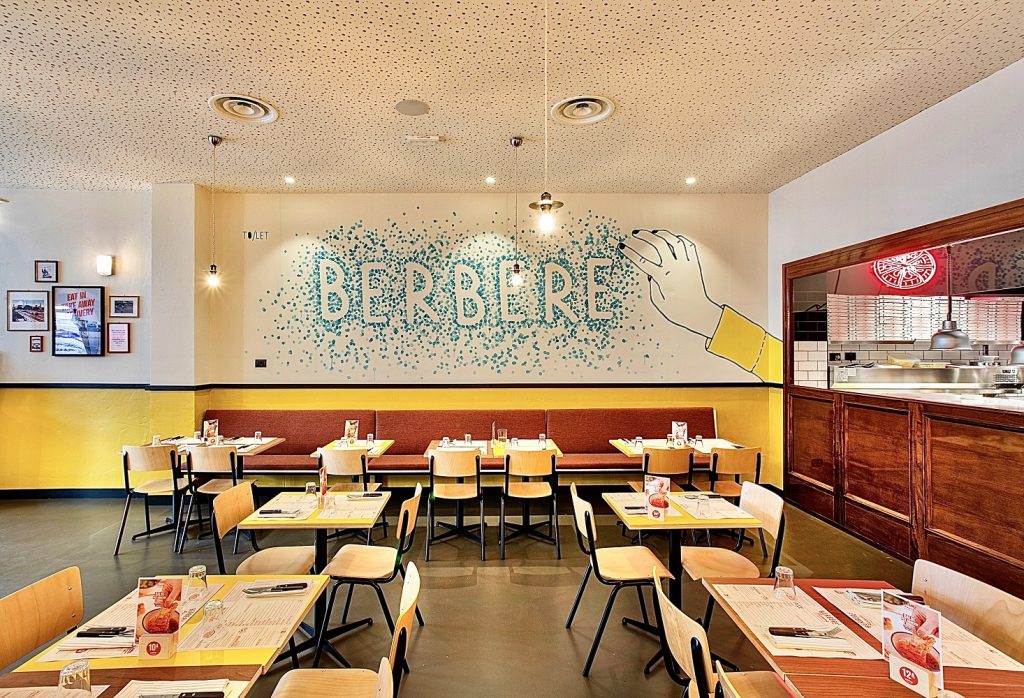 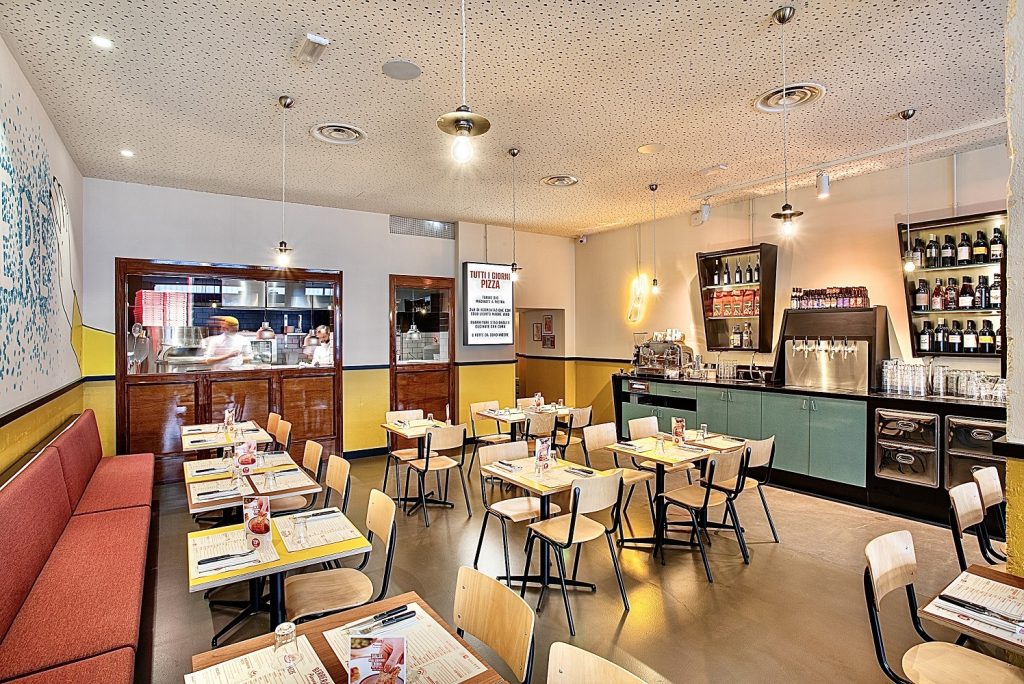 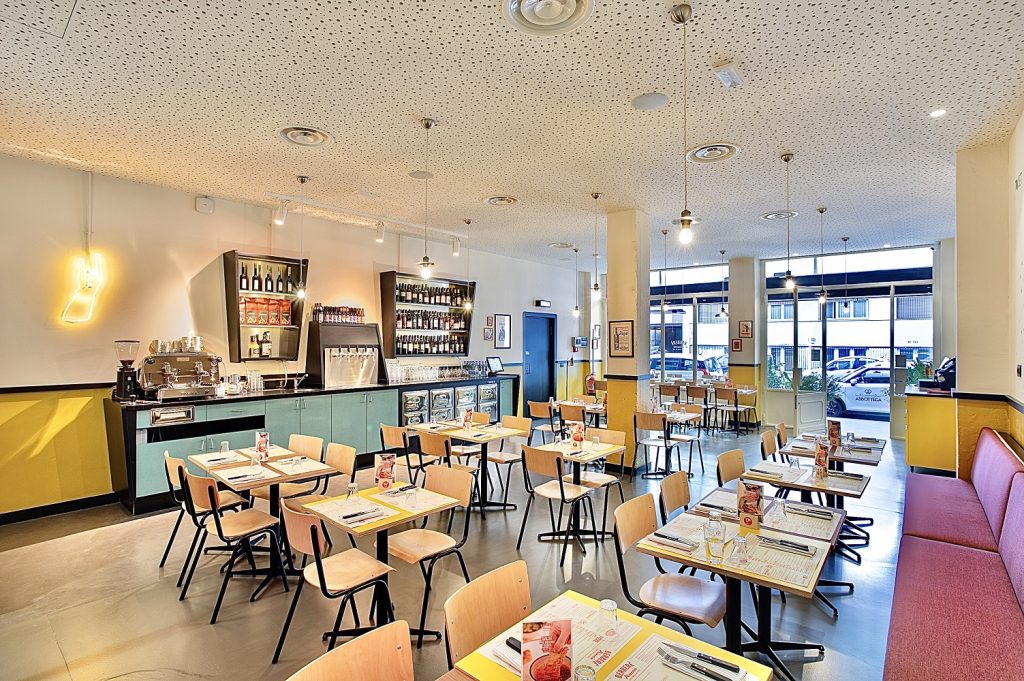 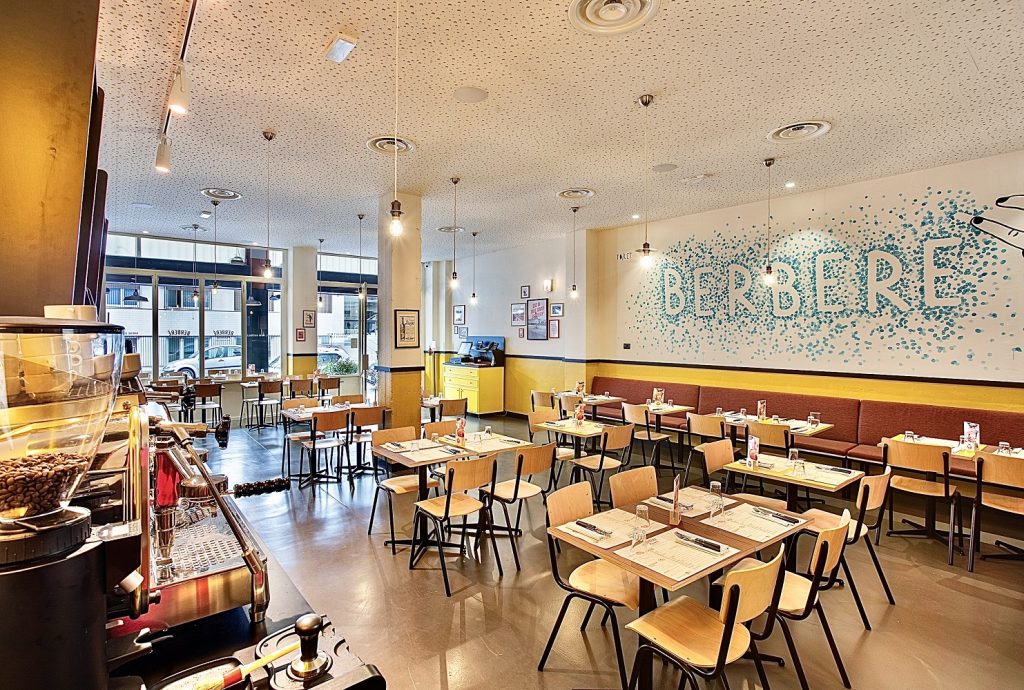 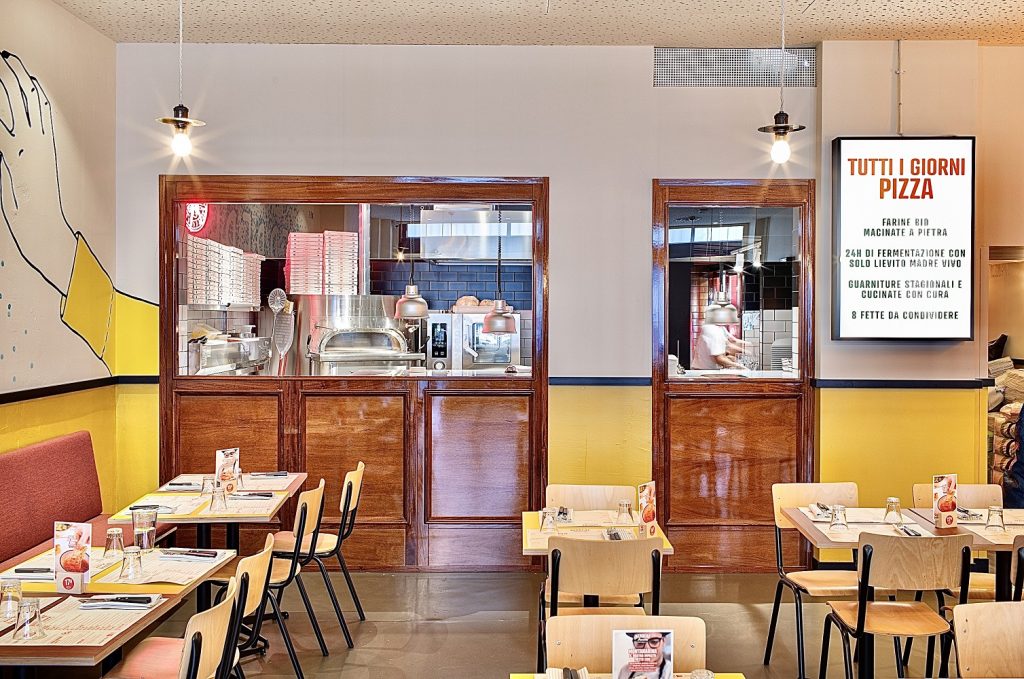 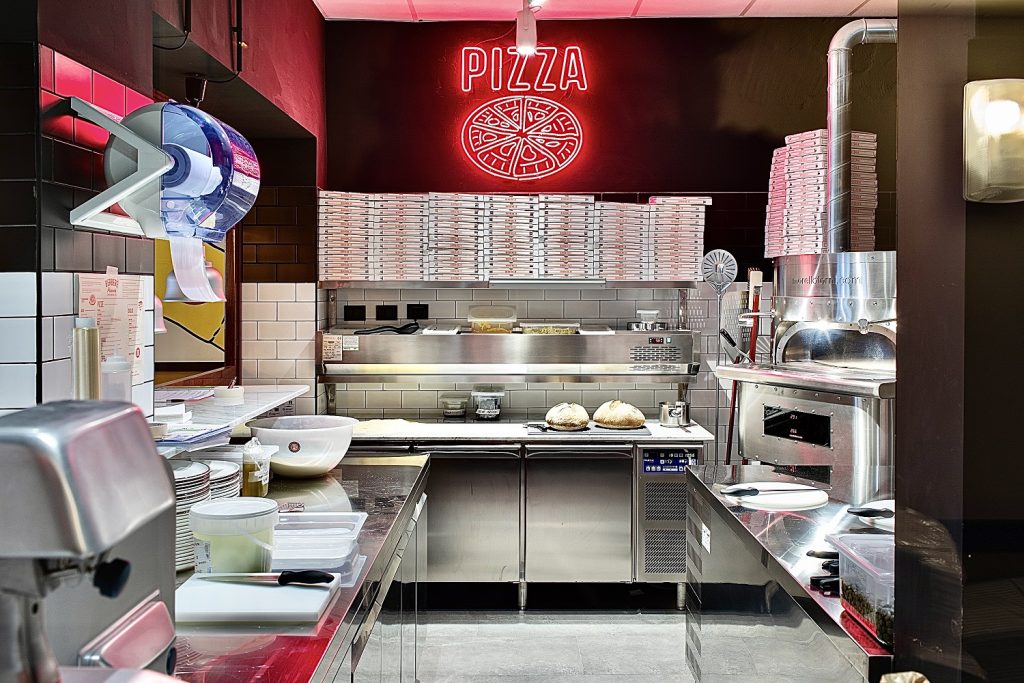 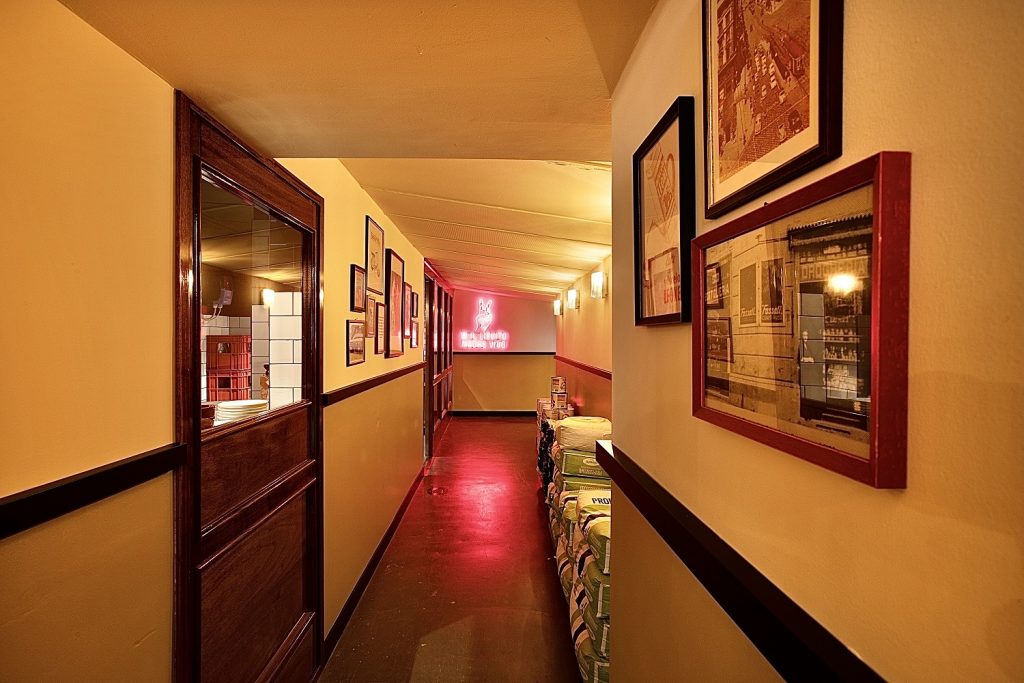 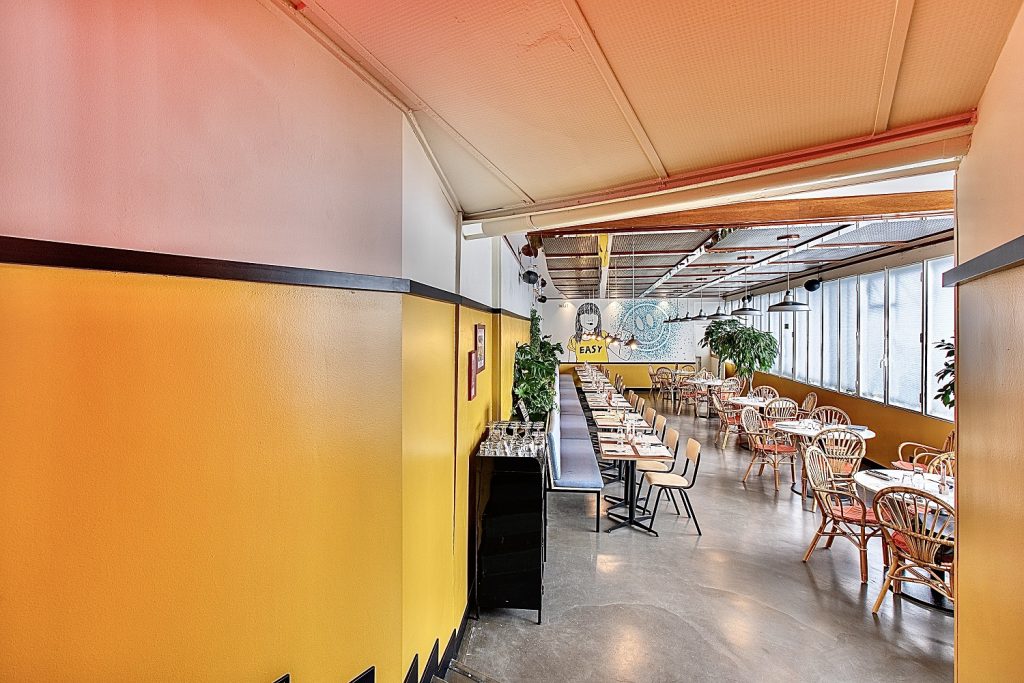 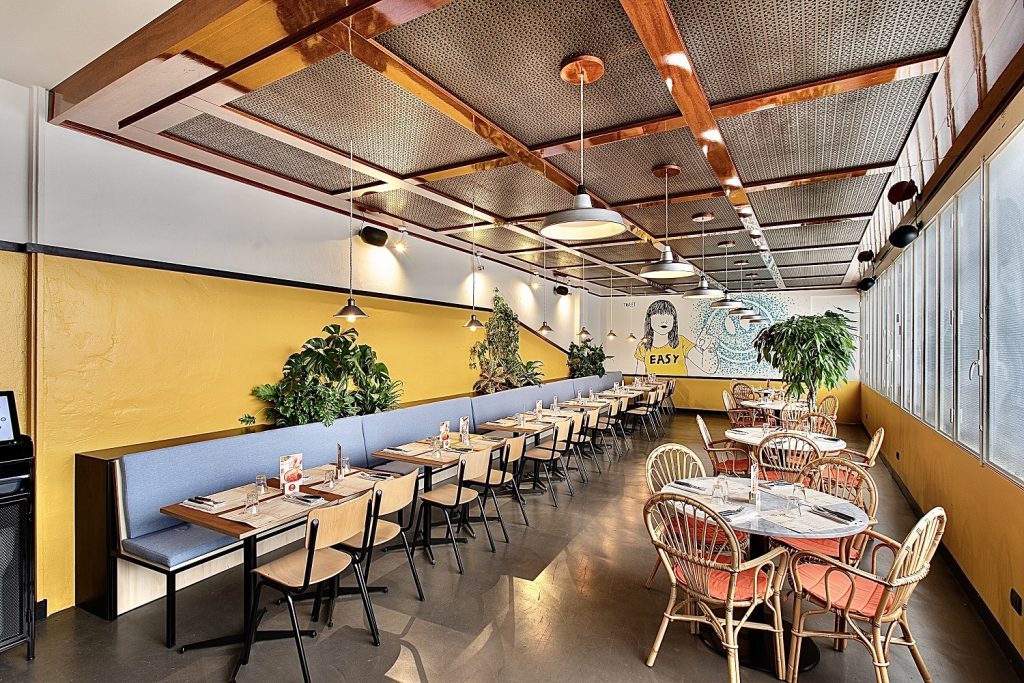 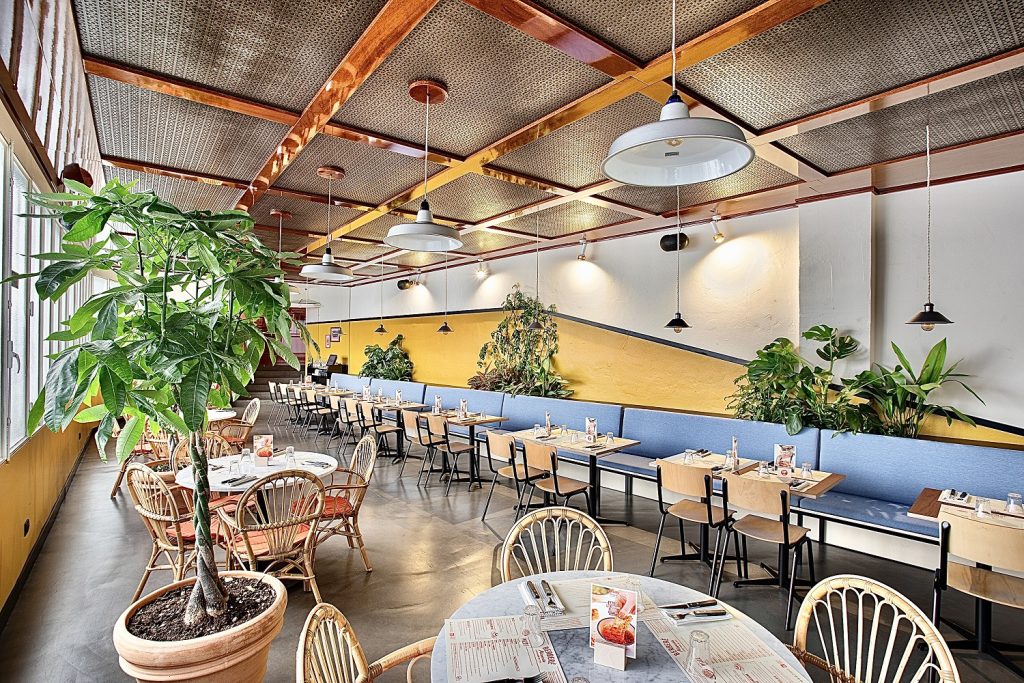 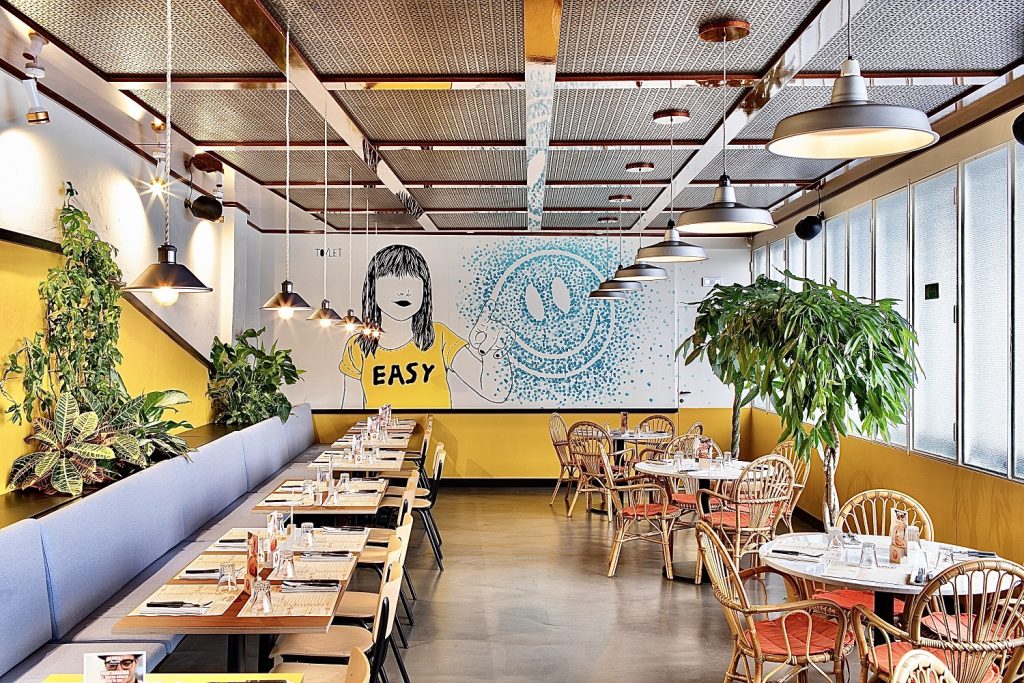